Take the role of a Greek god, and manipulate the elements to propel your champion to victory in a race to Olympus

2-6 players take the roles of competing gods, vying to overcome their rivals by influencing the fate of their champion.

A triple-layered, rotating board allows for strategic and exciting gameplay, both in advancing your champion and obstructing the progress of others.

Players use their godly powers to play elemental cards, allowing them to move their champions, build bridges to higher levels, rotate the arena, and block the actions of other players.

Meanwhile, the actions of other gods (represented by their own deck of cards) will affect all of the champions, forcing constant rethinking and adaptation.

Playful Gods is a fast, fun family game that offers room for strategic thought. Players will need to make tough choices every turn between pushing towards victory or slowing their rivals. 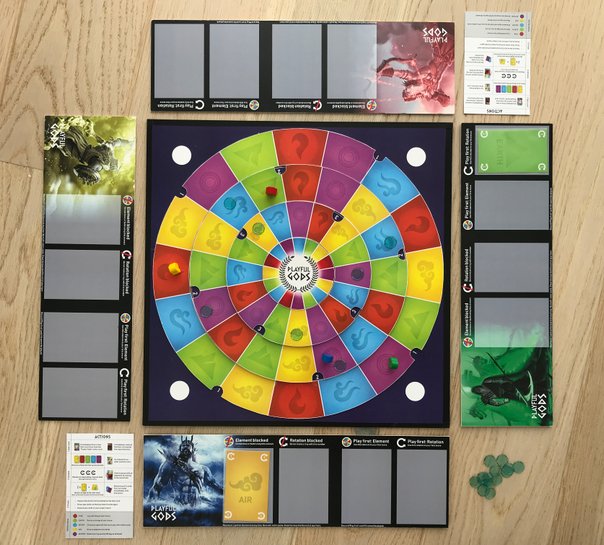 3 discs and a solid center

Click below to see a 7 minute video where I take you through some of the rules and explain the gameplay.

Click below to see a 3 minute video of actual game play in fast forward speed.

Watch this video to learn the rules in 6 minutes.

Playful Gods has been extensively tested, reworked, and balanced with the help of board game designers, gamers, and of cause the target audience; families including children. In total over 50+ play tests have been run with a wide variety of groups.

The rules have been blind tested and proved to be quick to grasp and easy to follow.

The game was originally designed for 2-4 players, but testing with 5 and 6 players revealed that the game was still just as fun, and played in around the same length of time.

I have lots of ideas for expansions and game variations that could be implemented once the base game has found a publisher.

Playful Gods is available to play on Tabletop Simulator here:

Playful Gods was entered into Fastaval 2020 - a competition at one of Denmark's biggest board game conventions.

133 games were submitted and Playful Gods was selected to be amongst the 21 finalists. 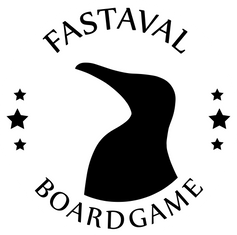 In this video, I will show you an entire game with 4 players. This will give you a good idea about game play and decisions mad while playing.

Note: All images and icons in this prototype are placeholders only and may be copyrighted elsewhere.