Riding Shotgun is a team-based game of bold bandits and grizzled guards battling it out in a frantic stagecoach raid on the sun-bleached plains of the Old West. Tactical card play, clever teamwork and shrewd bluffing will be needed to see your team triumph, riding off victoriously into the sunset.

In Riding Shotgun, two teams of players take on opposing roles, as guards trying to escort a stagecoach loaded with gold safely to the big city, or bandits looking to pull off the perfect raid and get away with all the loot.

The guards can win by shooting up the bandits so badly that they turn tail and flee, or by defending themselves long enough that the stagecoach reaches the end of the trail. Meanwhile, the bandits can try and stop the stage altogether with dynamite, or use their lassos to grab all the bags of gold from under the guard’s noses!

Each turn, players hold a hand of cards, from which they must discard one. This discarded card determines the order that players take actions, and becomes available for use to the opposing team, so careful decisions need to be made from the get-go. On a player’s activation, they can use their cards to shoot enemies, throw dynamite, lasso gold or defend against enemy attacks. Additionally, every action involves one card being played face down, so opportunities to bluff and counterbluff abound. At the end of the turn, the discarded cards left on the table determine whether the stagecoach speeds up or slows down, adding another layer of intrigue to the gameplay.

Players also have a limited number of intervention cards, which can be used at key moments to prevent a crucial attack, assist an ally or regain much-needed grit points, which are lost when a player takes a hit or is caught bluffing. The right intervention at a key moment might just swing the game in your favour.

Riding Shotgun is a fast-paced game of teamwork, bluffing and tense decision making. Ultimately, the team that can coordinate its actions the best will come out on top! 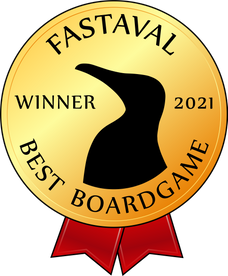 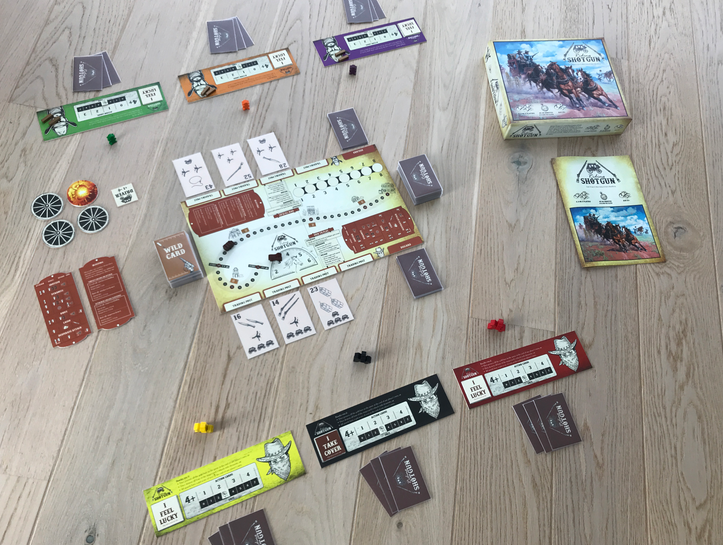 Riding Shotgun is available to play on Tabletop Simulator here:

Riding Shotgun was entered into Fastaval 2021 - an international competition at one of Denmark's biggest board game conventions.

Just under 200 games were submitted and Riding Shotgun won the competition as "Best Board Game". 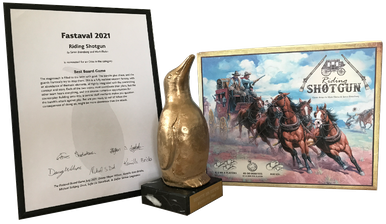 The judges said:
The stagecoach is filled to the brim with gold. The bandits give chase, and the guards frantically try to stop them. This is a fully-realized western fantasy, with an abundance of thematic elements, all tightly integrated with the overarching concept and story. Each of the two teams must coordinate their plans, but the other team hears everything, and this creates numerous opportunities for counterplay. Building onto this, a central bluff-mechanic makes you question the bandit's attack against you. But are you ready to call it? When the consequences of doing so, might be more disastrous than the attack.

Note: All images and icons in this prototype are placeholders only and may be copyrighted elsewhere.

“There's always something at stake. Even when the defender has no action cards the attacker could still be bluffing. There's no given”

“Until the very end, it felt like the game could go either way. This really made the bluffing a lot more tense”

Interview and game overview with Game4LifeBG